This guide shows how to set up your SDK development environment to deploy Cordova apps for iOS devices such as iPhone and iPad. See the following for more detailed platform-specific information:

The command-line tools above refer to versions prior to Cordova 3.0. See The Command-Line Interface for information about the current interface.

Apple® tools required to build iOS applications run only on the OS X operating system on Intel-based Macs. Xcode® 6.0 (the minimum required version) runs only on OS X version 10.9 (Mavericks) or greater, and includes the iOS 8 SDK (Software Development Kit). To submit apps to the Apple App Store℠ requires the latest versions of the Apple tools.

You can test many of the Cordova features using the iOS emulator installed with the iOS SDK and Xcode, but you need an actual device to fully test all of the app's device features before submitting to the App Store. The device must have at least iOS 6.x installed, the minimum iOS version supported as of Cordova 3.0. Supporting devices include all iPad® models, iPhone® 3GS and above, and iPod® Touch 3rd Generation or later. To install apps onto a device, you must also be a member of Apple's iOS Developer Program, which costs $99 per year. This guide shows how to deploy apps to the iOS emulator, for which you don't need to register with the developer program.

The ios-sim and ios-deploy tools - allows you to launch iOS apps into the iOS Simulator and iOS Device from the command-line.

Once Xcode is installed, several command-line tools need to be enabled for Cordova to run. From the Xcode menu, select Preferences, then the Downloads tab. From the Components panel, press the Install button next to the Command Line Tools listing.

Use the cordova utility to set up a new project, as described in The Cordova The Command-Line Interface. For example, in a source-code directory:

To deploy the app on a connected iOS device:

To deploy the app on a default iOS emulator:

You can also use cordova run --help to see additional build and run options.

Open a Project in the SDK

Once ios platform is added to your project, you can open it from within Xcode. Double-click to open the hello/platforms/ios/hello.xcodeproj file. The screen should look like this:

To preview the app in the iOS emulator: 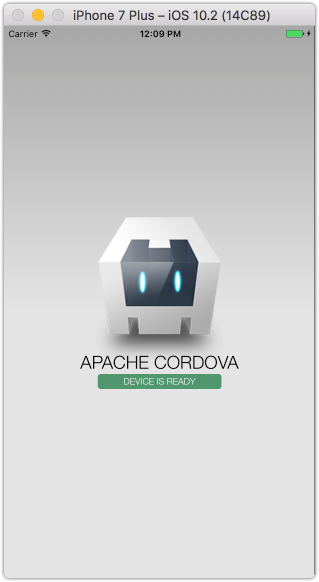 Only one emulator may run at a time, so if you want to test the app in a different emulator, you need to quit the emulator application and run a different target within Xcode.

Xcode comes bundled with emulators for the latest versions of iPhone and iPad. Older versions may be available from the Xcode → Preferences → Downloads → Components panel.

For details about various requirements to deploy to a device, refer to the Launch Your App On Devices section of Apple's About App Distribution Workflows. Briefly, you need to do the following before deploying:

To deploy to the device:

Deprecation Warnings: When an application programming interface (API) is changed or replaced by another API, it is marked as deprecated. The API still works in the near term, but is eventually removed. Some of these deprecated interfaces are reflected in Apache Cordova, and Xcode issues warnings about them when you build and deploy an application.

Missing Headers: Compilation errors relating to missing headers result from problems with the build location, and can be fixed via Xcode preferences: 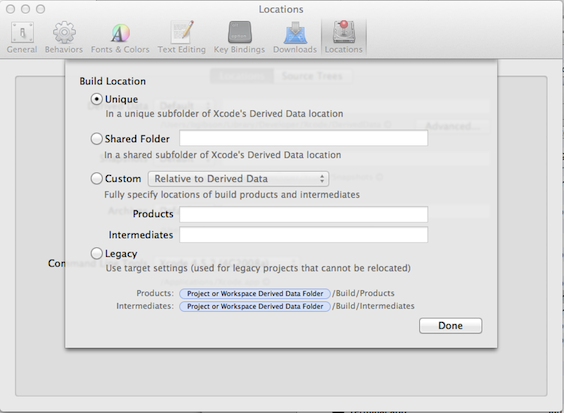 This is the default setting for a new Xcode install, but it may be set differently following an upgrade from an older version of Xcode.

© 2012-2015 The Apache Software Foundation
Licensed under the Apache License 2.0.
http://cordova.apache.org/docs/en/5.4.0/guide/platforms/ios/index.html